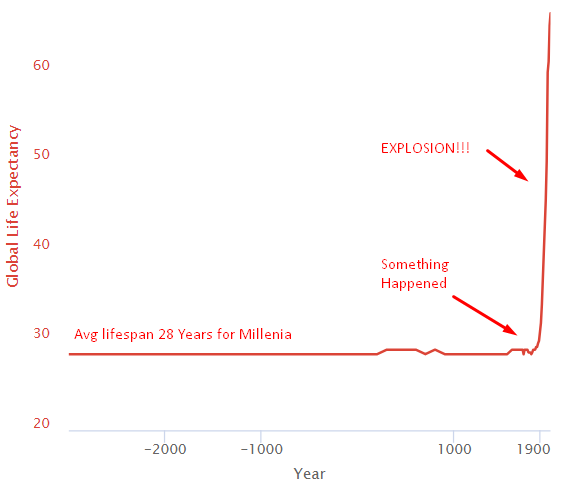 For thousands of years, everything sucked and the average human life expectancy was 28. Then something happened around 1800 and life-expectancy exploded.

Let’s zoom in and see what happened in the last couple of centuries leading to this explosion.

We see on the timeline are two primary groups of factors:

An influx of new state-affiliated pharmacy schools in the 1880s and 1890s helped to raise the level of the practice significantly. Many like the University of Wisconsin combined laboratory science with an experiential requirement for graduation. The growth in schools of medicine trained physicians and researchers in the systematic collection of clinical data on the safety and efficacy of treatments. They also served as hubs where new medical discoveries could be shared.

The advent of journals such as the Journal of the American Medical Association (JAMA) allowed new discoveries could also be widely disseminated.

In 1905, the AMA formed its own Council on Pharmacy and Chemistry which levied a fee on manufacturers to evaluate their drugs for quality (ingredient testing) and safety. Drugs accepted by the Council could carry the AMA’s Seal of Acceptance. The AMA’s Chemical Laboratory tested commercial statements about the composition and purity of drugs in their labs. The Council on Pharmacy and Chemistry followed up with safety
evaluations and rudimentary efficacy evaluations designed to eliminate exaggerated or misleading therapeutic claims. The Seal was awarded to drugs that provided symptomatic relief.

During the 1920s, ’30s, and ’40s medical researchers began to conduct “cooperative investigations”. These were designed to overcome errors attributed to individual observers working in relative isolation. It instead replaced them with standardized evaluations of therapeutic research in hundreds of patients.

Therapeutic experimentation did not begin to gain a true foothold in modern medicine until the U.S. legal system stopped equating experimentation with medical malpractice. In 1935, the state of Michigan authorized controlled clinical investigations as a part of medical practice without subjecting the researcher to strict liability (without fault) for any injury so long as the patient consented to the experiment. In particular, the court accepted that experimentation was necessary not just to treat the individual, but also to help medicine progress. “We recognize,” noted the Court, “the fact that if the general practice of medicine and surgery is to progress, there must be a certain amount of experimentation carried on.”

In the late nineteenth and early twentieth century, interest in clinical objectivity grew, spurred on not only by astounding successes in laboratory science and clinical medicine abroad (e.g. discovery of microbes, pasteurization of milk, development of anthrax and rabies vaccines). International recognition of medical patents contributed to a boom in large-scale industrial pharmaceutical manufacturing led by Bayer and Pfizer. In 1880, patent medicines constituted 28% of marketed drugs. By 1900, however, they represented 72% of drug sales.

The industrial revolution gave way to technologies allowing for mass production and distribution on a global scale. This is vastly more efficient, and profitable than traditional means. These greater profits drove greater investment and thereby greater medical progress in the field.