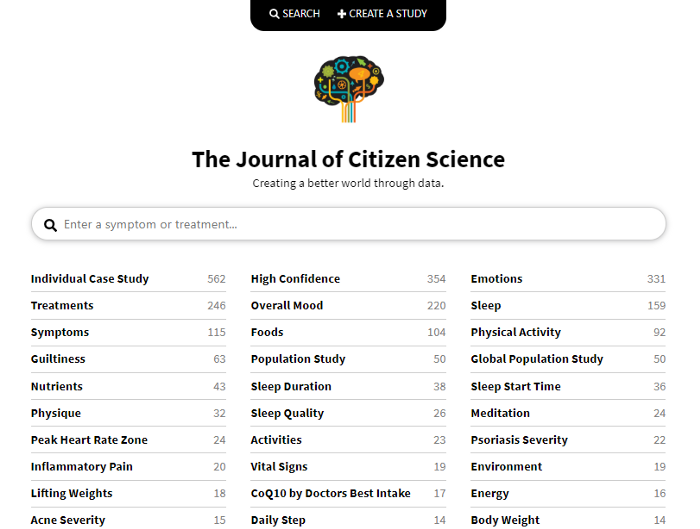 We publish our anonymously aggregated analyses at the Journal of Citizen Science. So far, we’ve collected over 10 million data points on symptom severity and influencing factors from over 10,000 people. This data has been used to freely publish 90,000 studies on the effects of various treatments and food ingredients on symptom severity.

Mega studies can be focused on either:

Outcome Mega Studies summarize all available analyses to determine the factors most likely to improve or exacerbate a symptom of chronic illness.

Predictor Mega Studies summarize all available analyses to determine the most likely positive or negative effects of a given factor such as a food or a drug.

Network graphs indicate the likely predictive strength of the effect of various factors on an outcome. Clicking the link between two nodes will take one to a more detailed analysis of the relationship.

Sankey charts indicate the likely predictive strength of the effect of various factors on an outcome in terms of the width of the link. Clicking the link between two nodes will take one to a more detailed analysis of the relationship.

Individuals may provide their own intuitive reports as to the most likely factors exacerbating their symptoms.

The Predictor Search allows one to search for the likely effects of a specific factor on the current outcome.

Currently, all foods carry nutrition labels such as this one:

But how useful is it to the average person to know the amount of Riboflavin in something? The purpose of nutritional labels is to help individuals make choices that will improve their health and prevent disease.

Telling the average person the amount of riboflavin in something isn’t going to achieve this. This is evidenced by the fact that these labels have existed for decades and during this time, we’ve only seen increases in most diseases they were intended to reduce.

We have created a new and improved Outcomes Label that instead lists the degree to which the product is likely to improve or worsen specific health outcomes or symptoms. We currently have generated Outcome Labels for thousands of foods, drugs, and nutritional supplements that can be found at studies.crowdsourcingcures.org. These labels are derived from the analysis of 10 million data points anonymously donated by over 10,000 study participants via the app at app.crowdsourcingcures.org.